The reason most of my weekly posts have been late this week is that we spent the weekend camping at a local lake.  Since most of our local school districts went back to school this week, it was our “Not Going Back To School” celebration.   (I do have to say, after 3 years of actually sending Jedi off to school, it was also very strange to *not* send him off to school this year.  But Jedi said he does not miss all of the hoopla that goes along with the first day of school.  I think he does miss the part about seeing some of your friends for the first time in 3 months, but I can’t even be so sure about that.  He recently saw a friend from his former school–they both were at the same store at the same time.  He was all excited to see the child, but then didn’t say a word to them when they saw each other.  It was more along the lines of “yay, he still exists even though I don’t go to school with him anymore”.  Aaaah, such is autism.)

Anyhow, the camping trip….  It started off a bit rough, as the first several hours were filled with a string of thunderstorms and drenching rains.  That was enough to clear out the lake and cause everyone who wanted to camp to give up and go home.  After they left, and the lake closed for the day, we had the entire campground to ourselves!  It was really fun to have the entire place to ourselves to run around, be loud, swim, fish, play games, hike, and explore.  The kids and I also had a project where we tried to find items in nature that were shaped like letters.  We managed to find every single letter!  Here’s a preview letter…I’ll have to put something together on the blog to show off the entire project once the photos are edited (I want to turn them into black & whites).

Jedi's big find! We were having trouble finding the letter N, and suddenly, he noticed these 3 trees!

Bug peeking out of the tent

We were at a lake. Yet the kids decided that this mud puddles was more fun. 😉 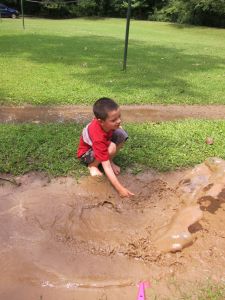 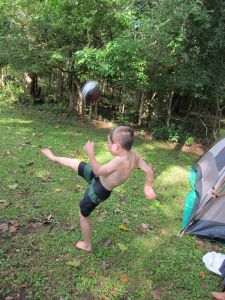 Not so nice kick. He kind of got in trouble for this a few seconds later...thankfully it missed Bug's head.

The kids and their daddy playing volleyball

Bug after a swim 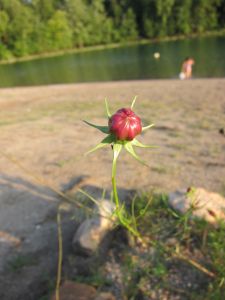 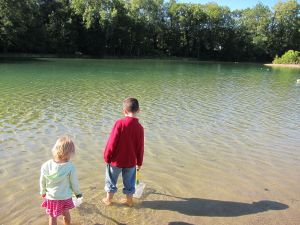 Bug and Jedi looking for minnows 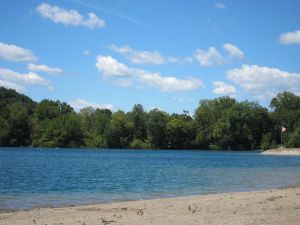 Bug looking at a flower

She's tearing the petals off now.

Monkey and her caterpillar she found

This week, we followed up on our zoo field trip by putting out several works related to zoo animals.  Both Bug and Monkey *loved* this, and they just love animals.  It also worked out well that we are studying South Africa as part of our geography unit, and thus also studying Africa, and African animals!

To help Monkey with her alphabet, I found this *fabulous* product called “The SENSEational Alphabet” by http://www.sensesationalalphabet.com/ .  This book is absolutely wonderful, especially for those children who may have sensory issues, learning disabilities, or other issues.  With Monkey’s soon-to-be likely diagnosis of autism, along with her sensory issues, this book really helps her learn the way she learns best.  This book hits so many different learning styles–the letter is written on each page, there is a button where the name of the letter and an example of a word starting with that letter are pronounced, each letter is written in Braille, then there is an object on each page to look at.  Often, these objects either have something to smell or something to touch/manipulate.  So, for example, for the letter A, she would see “Aa” and a picture of an apple (which happens to have some tactile texture to it for her to feel), then she could press the red button to hear the “A, a, Apple”.  Then, if she knew Braille (which she doesn’t. LOL!), she could also feel the letter A that way.

Bug and Monkey working with the SENSEational Alphabet book.

To go along with the zoo field trip from last week, I put these animal ice cube trays out, with a zoo themed set of chopsticks. The chopsticks are used to put a pom pom into each opening in the tray.

We try to coordinate Jedi's geography lessons with the girls, so we have a shelf out to focus on South Africa (and in the continent of Africa as well. I have several books on Africa and South Africa, the language card for South Africa, some wooden animal masks from Africa, some musical instruments, and some small stuffed animals that were purchased from a friend who went to Ethiopia.

Monkey working with the African animals

Close-up of the animal masks

Monkey as a zebra 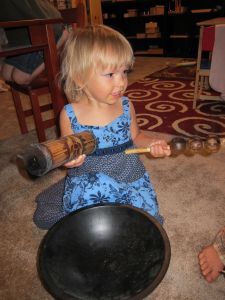 Bug with the musical instruments 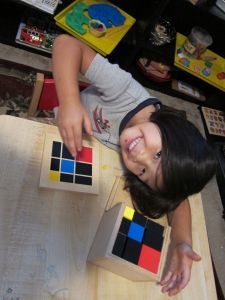 Monkey working with the trinomial cube 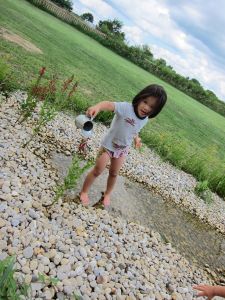 Using the water to water the flowers

A butterfly in the rain garden that monkey found

This week has been a rather interesting week for Monkey, primarily outside of the schoolroom.  As you might remember, Monkey has been diagnosed with Reactive Attachment Disorder with Selective Mutism.  As you also might remember, we had noticed several cognitive difficulties popping up that were making learning difficult for her.  Well, this past week, we took her back to her former therapist (who happens to be Jedi’s autism therapist), and he has decided to have her assessed for an autism spectrum disorder as well.  If she does have a form of ASD, we would not be surprised, given how similar symptoms of RAD are to ASD.  What does make it surprising is that Monkey will not only have the exact same allergies as the other kids, but will also have the same developmental issues…keeping in mind, Monkey is not biologically related to our other children, this is quite interesting (and somewhat concerning…).  Anyhow, these evaluations should take several weeks, but hopefully we’ll have a better idea of how to help Monkey soon.

In the mean time, we’re doing a lot of trial and error with her.  Since Jedi has autism, we do have several resources under our belt to help academically, socially, and emotionally–it’s just a matter of pinning down what the exact issues are.

And on to what you really came to see….Monkey’s week in review.

Monkey looking at the "forest in a box"...it has various objects that you might find in the forest--bark, acorns, bird egg, cocoon, porcupine quill, etc.

Dot painting...one of her favorite activities! 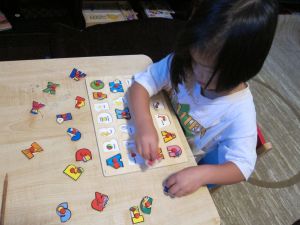 Working on the alphabet puzzle

Working with the knobbed cylinder

Monkey begged to use clay this week, so I brought out the new tub. She *loved* it!

Working with the binomal cube--Monkey can do this really quickly now! We'll be bringing out the trinomial cube this week as a result. 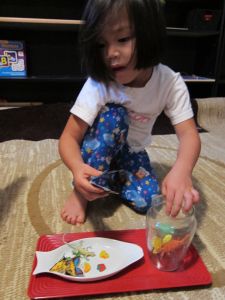 Working with the tonging activity

Montessori in the kitchen...Bug washing tomatoes and Monkey cutting them up to make tomato sauce

As always, comments are welcome, either here or on our facebook page.  Let me know you’re reading along!

Since we’ll be out again Monday & Tuesday, I’m getting this week’s posts out a little early. 🙂

The "A" tray--I have the sandpaper letters, some pipe cleaner letters, an apple, and a worksheet. I just wanted to see what things Monkey liked--she loved the worksheet (but didn't really seem to understand what to do even after I explained it to her), but the rest of it she didn't really get into. So, this lasted about a day with her. 🙂

Playing a card game where you match the capital and lower case letters.

She's so proud of her matches!

Painting with watercolors. This was her all time favorite activity of the week--she did it for several hours this week!

Using the mini peg board

Stringing large buttons on a shoestring

Using the spindle box...Monkey's getting very good at this!

Monkey, Jedi, & Bug all helping to bake the cake.

As always, comments are welcome, either here or on our facebook page.  Let me know you’re reading along!

Since this past week was the start of summer, we changed the Spring Tree to a Summer Tree.

Bug putting leaves on the tree as well.

Using the knobbed cylinders--this was her first time using all four at once.

Monkey was working on being able to retell a story. She is really into the princess stories right now, so she worked on a felt board of Sleeping Beauty.

Monkey is making patterns with the pattern beads.

We were talking about spiders this week, so the girls made spider web paintings. We coated a marble with white paint and then rolled it around on black paper.

Here, she was putting together the alphabet dragon. She recognized every letter and put them in order without help!