Bitty Bug has been trying to do more work with Monkey in the school room this week.  As a result, the school room usually looks like a tornado hit.  So, we’ve also been working with Bug on putting things back on the shelf.  This is a slow-going process for sure, but I think she’s starting to finally get it!  At first, she resisted a lot, as toddlers tend to do.  But slowly, she’s starting to come around and at least make an attempt to put things back on the shelf!

While Monkey was working on sorting coins this week, Bug wanted to work on dry pouring the coins.

Using a spoon to transfer little glass pebbles into the ice cube tray.

Pinning clothes pins to the rim of the basket.

Working with her wooden rainbow. She was naming colors and attempting to sort by size.

Bitty Bug continues to gain a fierce sense of independence (except of course when you bring her into a room full of people she doesn’t really know…then she curls up and gets shy. 😉 ).  But, she is getting very good at telling you what she wants, telling you that she wants to do it herself, and telling you when she feels wronged.  And to a toddler with two older siblings, she feels wronged a lot…like any time they have something really cool in their hands that she really really wants at that moment.  So, this week has been a week where Miss Bug learns some frustration tolerance, sharing, and how to deal with her big emotions.  That’s a big job for any child, but when you’re a little toddler with a limited vocabulary, that can be very hard.  So, we’ve seen a lot of tantrums this week, but we’ve also seen a lot of progress where she comes right to us and tells us what’s wrong.  It might be hard to understand what she’s saying, especially when she’s so upset, but she’s trying really hard to express herself!

Here are some pictures of Bug’s week of learning…. 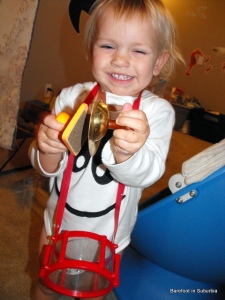 Working with the Autumn/Thanksgiving matching cards. She really enjoyed looking for all of the pictures of pumpkins, since she did a lot of work with pumpkins in recent weeks. There were also a couple of cards she could actually match up too! But in general, I wasn't going for matching...I just was happy that she was looking through the cards! 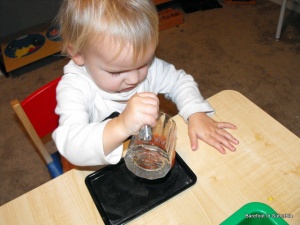 Bug still loves pouring water! It's probably one of her favorite works. Here, she's pouring from a creamer to a child sized tea cup.

I started Bug on color box 1. I was really impressed--not only could she match them up, but she could point to the correct color when I asked her to find yellow, then blue, then red. And she could name the yellow cards when I asked her what color those were.

Working with her shades & sizes peg board.

The bead after bead board was another one that was a big hit with Bug this week. She's really into counting and colors, so this work combined both of them. She can count to 5 without help and can count to 12 with help! She can also independently name "yellow" and "orange" (probably because we have been working really hard on colors with Monkey, who is still having a really hard time with them.)

Bug still loves the autumn leaf sorting activity. She can't sort the individual colors yet, but she can name some of them. She usually sorts the green ones in one cup, and yellow, orange, and purple in the other cup. This is also good for using the pincher grasp, since all the leaves are pretty small.

***Have you entered our giveaway yet? Enter to win a free set of Montessori albums and a training course by Karen Tyler! http://tinyurl.com/2euh3tm ***
***Do you like what you are reading on Barefoot in Suburbia? If so, please consider voting for us in the 2010 Homeschool Blog Awards–we have been nominated in the Best NEW Homeschool Blog category! http://hsbapost.com/ ***
Comments (3)